Back to All Animals
While most jellies drift with the current, their tentacles pointed downward, this striking jelly lies on its bell on the sea floor, its branching oral arms pointing toward the surface to catch zooplankton as it passes by.

Upside down jelly’s nourishment comes from the algae in its tissues, called zooxanthellae 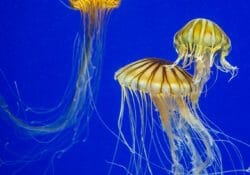 Behind the Seas Tours

Our Behind the Seas tours offer a backstage look at our most popular exhibits.

PLEASE NOTE: Our Dolphin Coast Gallery will be closed for routine maintenance between January 21st and January 29th.  During this time there will be no gallery viewing, presentations, or dolphin encounters.