Join us as we celebrate Sea Otters!

Can you keep a sea-cret? Southern sea otters are the smallest marine mammals that inhabit our oceans! With their thick fur and broad, whiskered face, it’s no wonder that these charismatic animals are favored by many people. However, because of this thick fur, sea otters were almost hunted to extinction during the fur trade. Sea otters are considered a “keystone species,” which means that they play a vital role in holding their ecosystems together; without them, the ecosystems would collapse. Since this realization, organizations like Georgia Aquarium have participated in conservation efforts to save this species.

Sea otters are a keystone species, which means that whole ecosystems would collapse without them. For this reason, organizations nationwide, including Georgia Aquarium, are proactive in protecting this species. Join us as we acquire an understanding about these otter-ly amazing animals and raise awareness about their threats and conservation efforts. We will have special, hands-on activities for guests of all ages, included with general admission. 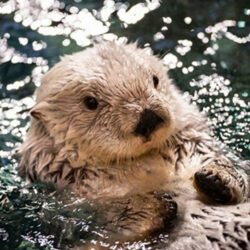