Back to All Stories
Take a bite out of these fun facts and sharpen your knowledge about all the species of sharks at Georgia Aquarium!

A visit to Georgia Aquarium truly provides an experience like no other. From the small blacktip reef sharks to whale sharks and everything in between, guests are able to learn about and experience these diverse species. Georgia Aquarium is proud to engage and educate guests to conserve these animals to ensure that they thrive and prosper for future generations. Head over to experience these eight unique species of sharks and learn about how your actions can affect these species on a daily basis!

To learn more about the sharks found at Georgia Aquarium during #SharkWeek be sure to follow along on Facebook for fun facts and a look behind the scenes. Georgia Aquarium recently recorded a whale shark feed live – check it out here!

Whale Shark – Ocean Voyager Built by The Home Depot
Known as the largest of all fish, whale sharks may grow in excess of 40 feet. Whale sharks are found worldwide in the tropical Atlantic, Pacific, and Indian Oceans. Their mouths can exceed four feet across, but their throat is only the size of a quarter! Due to the small size of their throat, whale sharks primarily eat plankton such as krill, fish eggs, fish larvae and a variety of small food items found in the water column. The skin of a whale shark can be as thick as four inches, limiting possible predators to killer whales, great white sharks, tiger sharks and humans. Whale sharks are listed as “Vulnerable” on the International Union for Conservation of Nature (IUCN) Red List since their populations have decreased dramatically in recent years due to heavy fishing driven by demand in Asia for meat and fins. Georgia Aquarium is home to whale sharks and is the only aquarium in the United States where you can find these sharks.

Sandbar Shark – Ocean Voyager Built by The Home Depot
One of the most abundant sharks in the Western Atlantic, sandbar sharks are coastal shallow-water sharks that are seldom seen at the surface. You typically won’t find these sharks near coral reefs, as they avoid rough-bottom areas. They are opportunistic feeders, feeding throughout the day, but mostly at night on bony fishes, smaller sharks, rays, cephalopods, gastropods, crabs and shrimp. Sandbar sharks are labeled as “Vulnerable” on the IUCN Red List since populations have been severely overfished. Sandbar sharks are caught for their meat, oil and skin, as well as their fins. They are also used for traditional Chinese medicine.

Pacific Blacktip Reef Shark – Ocean Voyager Built by The Home Depot
A smaller shark with a rounded snout and distinct black tipped fins, blacktip reef sharks are found in shallow inshore waters on coral reefs and near reef drop-offs. They are found in the Indo-Pacific. Their long, serrated teeth help with eating fish. They also feed on crustaceans, cephalopods and even snakes! These sharks cruise in very shallow water with their dorsal (top) fin often extending above the surface. They have been known at times to jump completely out of the water while in the shallows. Blacktip reef sharks are “Near Threatened” on the IUCN Red List since they are regularly caught by inshore fisheries and are vulnerable to depletion because of their small litter size and long gestation period.

Epaulette Shark – Ocean Voyager Built by The Home Depot
These nocturnal sharks’ muscular pectoral fins enable them to walk along the bottom of the ocean. When disturbed, they will sometimes “run” away instead of swimming from danger. Epaulette sharks are found in shallow waters among coral reefs and tide pools. They are found in the Western Pacific. These sharks are small and slender with a short snout. Their diet consists of shrimp, crab, small fish and worms. These unique sharks can be trapped in tide pools by the receding tide and survive several hours with little or no oxygen. Current research studies are exploring how the shark manages so well with limited oxygen. Researchers believe findings may help in the treatment of stroke victims and conducting difficult surgeries.

Zebra Sharks – Ocean Voyager Built by The Home Depot
The zebra shark’s name is derived from the striped color pattern on their bodies when they are newly hatched. These slow moving, somewhat nocturnal sharks are harmless to humans. Zebra sharks are found on and adjacent to coral reefs. These sharks have a spiracle behind their eye, which allows them to rest motionless on the bottom and still circulate water over their gills. Zebra sharks have the ability to fit into small crevices and holes in the reef to search for food, preying mostly on snails and shrimp.

Spotted Wobbegong – Ocean Voyager Built by The Home Depot
A master of escaping notice in plain sight, spotted wobbegongs rest quietly on the ocean floor, almost undetectable. Spotted wobbegongs are bottom-dwelling sharks whose range includes the eastern Indian Ocean and the South China Sea in warm waters. These nocturnal feeders prey on bottom invertebrates and bony fishes. Watch out though, this species will bite if stepped on or provoked!

Tasselled Wobbegong – Ocean Voyager Built by The Home Depot
This ambush predator lies motionless on the bottom, blending into the reef structure until small fish or other prey move within striking distance; then they quickly open their mouth, sucking in their prey, consisting of bottom-dwelling fish and invertebrates. Much like the spotted wobbegongs, the tasseled wobbegongs are masters of escaping notice in plain sight. Tasseled wobbegongs are found in the Western Pacific commonly on the Great Barrier Reef.

Swell Shark – Cold Water Quest
The swell shark’s name comes from their ability to swallow large amounts of water, swelling their bodies to twice their normal size, appearing larger when threatened by a potential predator. Swell sharks ambush their predators by remaining motionless on the bottom with their mouths open waiting for prey to wander in. They have 55 to 60 small teeth in both the upper and lower jaw and feed mostly on small fish and crustaceans. This shark species is found in temperate waters from central California to the Gulf of California. 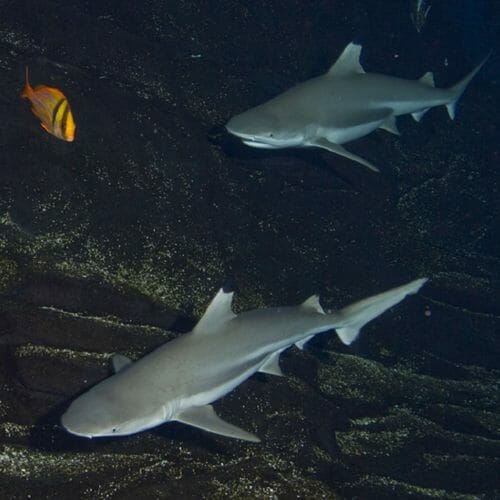