Sawfish – are they sharks or are they rays? While this animal’s body closely resembles the look of many sharks, the sawfish is in fact a member of the ray family tree. A sawfish’s gills are on its underside, a trait that helps distinguish rays from sharks. Sawfish get their name from their “saws” – their long, flat rostrums edged with pairs of teeth that they use to locate, stun, and kill prey. The sawfish are incredibly unique in appearance, making them a literal and figurative “double-edged sword.” This appearance is part of the reason they are one of the most critically endangered fish in the world.

Their rostrum has approximately 25-34 teeth, which can snag easily in nets or other fishing gear, and many anglers choose to kill them rather than take the time to free them in order to save their gear, adding to their depleting populations. Spotting a sawfish in the wild has become incredibly rare, as these animals are now extinct from half of their former habitats. Aquariums, including Georgia Aquarium, help play an important role in the conservation efforts. One of the only chances most people will ever get to see them or learn about their existence is to visit an aquarium. In 2012, the largest female sawfish at the Atlantis Paradise Island Resort, an Association of Zoos and Aquariums -accredited aquarium in the Bahamas, gave birth to four pups – the first successful sawfish breeding in an aquarium. Little is known about the reproductive behavior and development of sawfish, but scientists now have the ability to learn important details that may help in the recovery of this species. Organizations around the world are working together to learn more about this species, and hope to learn new ways to conserve them.

Georgia Aquarium is home to a sawfish that resides in our Ocean Voyager Built by The Home Depot gallery. “The ability to come to an aquarium and make a connection with an animal people would otherwise never see and marvel at its extraordinary adaptations and learn about its biology – that alone is the big step towards addressing its conservation plight,” Dr. Alistair Dove, vice president of research and conservation at Georgia Aquarium, said. “It’s hard not to be impressed.”

As part of the conservation efforts, Georgia Aquarium is hosting an International Sawfish Conference from November 6-9 for the first time, bringing in academics and conservationists from around the world to discuss and brainstorm new ways to raise awareness and to conserve this amazing fish. Stay tuned to our Facebook, Instagram, and Twitter to stay up-to-date on sawfish and to learn how you can help. 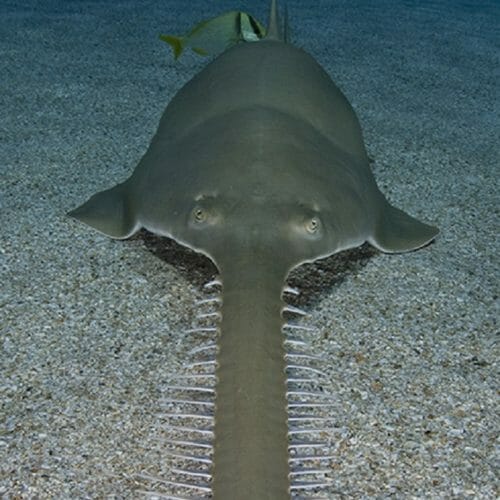