Back to All Animals
Red piranha, also known as red-bellied piranha, maintain their powerful bite by replacing teeth throughout their life. These fish exhibit a “lurking and dashing” behavior, waiting in the vegetation of interconnected pools and creeks in South America to ambush prey.

Red Piranhas are highly predaceous carnivores that scavenge for food; consuming insects, snails, worms, plants and even nipping the fins of other fishes 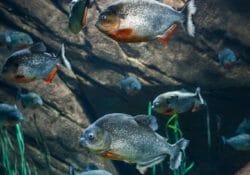