Florida manatees are in a crisis due to starvation and loss of habitat. The seagrasses they need to survive are disappearing due to water pollution in the Indian River Lagoon. A record 1,100 died last year, and critical care facilities are running out of space to care for them. Georgia Aquarium joined the Manatee Rescue & Rehabilitation Partnership to provide emergency care and housing for manatees in distress. There are currently five critical care facilities for manatees in Florida, including SeaWorld Orlando. Once the manatees’ conditions are stabilized, it’s ideal to move those manatees to secondary care facilities to free up space in the critical care facilities. Now, even the secondary facilities are filling up. Because of this, Georgia Aquarium joined the MRP to increase the capacity for care until the manatees are ready to be released back to local Florida waters.

Operating as an extension of SeaWorld’s permit, we can receive manatees that are past the critical care stage. Two orphaned manatee calves, a male and female, arrived at Georgia Aquarium from SeaWorld Orlando on March 9. The female calf was rescued from Blue Springs, Florida, on Dec. 2. At the time of rescue, she weighed only 124 pounds and suffered from cold stress. She now weighs closer to 175 pounds and is in stable condition. The male calf was found at the Port St. John power plant with a deceased female manatee believed to be his mother. He was rescued on Dec. 15 and weighed only 126 pounds. His most recent weight is around 160 pounds, and he also is in stable condition. Both calves, who are unnamed, are too young and small to be released. They will be cared for at Georgia Aquarium’s Animal Care Facility until they are closer to 600 pounds and the veterinarians determine they are ready to be prepared for release.

The manatee calves are being cared for in a private area and will not be viewable to the public. 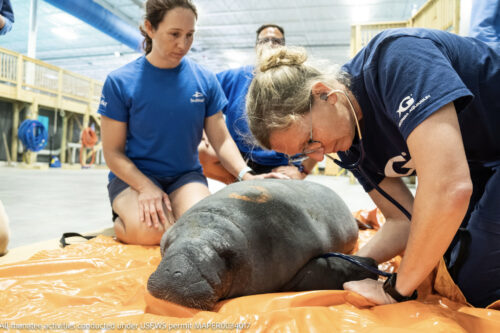 In 1967, the Florida manatee, a subspecies of the West Indian manatee, was listed as “endangered” under the federal Endangered Species Act, mainly due to threats from waterfront development and boat strikes. In 2017, the U.S. Fish & Wildlife Service (FWS) upgraded the manatee status to “threatened,” after a Florida Fish and Wildlife Conservation Commission (FWC) survey found more than 6,000 manatees in an aerial survey, up from fewer than 1,500 reported in 1991.

In March 2021, an Unusual Mortality Event was declared due to record number of manatee deaths – 1,101 reported deaths in 2021, up from a five-year average of 625 per year. The primary cause of death is starvation from lack of seagrasses in the Indian River Lagoon, following years of poor water quality that has led to harmful algal blooms and widespread seagrass loss.

In December 2021, several environmental organizations announced their intent to sue the Environmental Protection Agency for failing to reinitiate consultation with FWS under section 7 of the Endangered Species Act, specifically regarding inadequate water quality standards set by EPA that now adversely affect manatees. 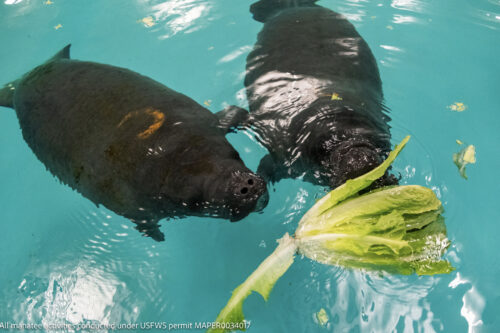 The MRP is a cooperative of aquariums, zoos, government agencies, NGOs and marine parks that rescue and respond to manatees in distress, rehabilitate them, release them back into Florida waters and monitor them.

There are five federally permitted acute care facilities in Florida that treat sick, injured and orphaned manatees: SeaWorld Orlando, ZooTampa, Miami Seaquarium, Jacksonville Zoo and Gardens, and Homosassa Springs State Wildlife Park. Once medically stabilized, manatees may be transferred to one of five secondary care facilities, including Georgia Aquarium, until they are ready for release.