Back to All Animals
The spotted eagle ray and its relatives are known as eagle rays due to the peculiar shape of their snouts – which are round and pointed at the tip, resembling a bird’s beak. The spotted eagle ray has an angular body disc with pointed, wing-like pectoral fins and a distinctive, spotted pattern on its back. This ray is often seen swimming either near the surface or along the bottom, and will leap completely clear of the water when pursued. It is known to feed on a wide variety of bottom-dwelling marine animals, including worms, mollusks, cephalods, crustaceans and fish, using its hard, plate-like teeth to crush the shells of its prey.

The spotted eagle ray will use its broad, pointed snout to probe the substrate for its bottom-dwelling prey 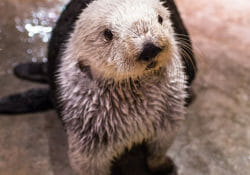