Sip, sip hooray! Georgia Aquarium and Atlanta Brewing Company have partnered once again to bring you their next aquatic-themed beer collaboration. It’s only fitting that this eighth edition feature the Aquarium’s eight-armed resident, the giant Pacific octopus! These two Atlanta-based companies will be debuting their latest creation, Octopus Brown Ale, on November 8, 2019.

This American brown ale brings you seasonal favorites with flavors of coffee and cinnamon. You can get your hands, and taste buds, on this perfect holiday brew at the official launch party at Atlanta Brewing Company on November 8, 2019 and will hit select store shelves on November 11, 2019. A portion of the proceeds from Octopus Brown Ale sales goes towards the Aquarium’s vital research and conservation efforts across the globe.

All of Georgia Aquarium and Atlanta Brewing Company’s oceanic animal-inspired beers have utilized photodegradable six-pack ringers to reduce plastic waste. Octopus Brown Ale will be the first beer from the brewery to use a degradable cardboard six-pack ringer that will not only promote marine conservation, but will not contribute to plastic waste on our planet or in our ocean. 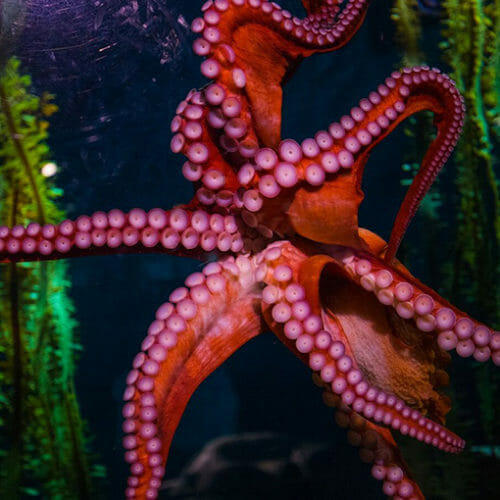