Earlier this year, we introduced and welcomed our seventh rescued California sea lion to the Georgia Aquarium family. Our animal care and veterinary teams chose a name for him following his arrival: Hunter. Like many rescued sea lions, it was discovered that Hunter had sustained several injuries in the ocean – including a propeller wound, fish hooks stuck in his mouth, and a problem with his left eye. Alongside his preventative and daily care, our animal care and veterinary teams been monitoring his left eye and its limited vision.

On August 31, 2017, Hunter will undergo eye surgery to hopefully help the difficulties in his left eye. The incredible support from our fans, and the funds from Georgia Aquarium’s 2016 Aqua Vino event will go directly to Hunter’s surgery and all of his care before, during, and after. We’re also working alongside a world-renowned pinniped ophthalmologist and a veterinary anesthesiologist to continue to provide him with the best care possible.

We will update our fans on Hunter’s progress as he heads into surgery and after on our social media pages @GeorgiaAquarium. We encourage everyone to follow along and send their well wishes to this amazing sea lion using #HelpingHunter!

More About Hunter
Hunter was initially found malnourished, injured, and emaciated on the coast of California and stranded a total of four times – each time needing assistance from local stranding centers. He made his way from the Pacific Marine Mammal Center in California to Atlanta after his fourth stranding and being deemed non-releasable by the National Oceanic and Atmospheric Administration (NOAA). Eye damage and injury can impact a sea lion’s survival in the ocean, and can also give them a disadvantage when catching prey or protecting themselves from predators.  Ultimately, due to Hunter’s non-releasable status, all the experts that care for him ensure that he has a safe home and access to the best healthcare.

His name is a tribute to the area in which he was rescued from in California – Huntington Beach. His name hopefully will remind others of the unfortunate mass stranding events off California coasts.

In his short time at Georgia Aquarium, he has been learning, thriving, and growing. Hunter not only has a namesake of his multiple rescues, but also his second chance at life.

You can read about Hunter’s background and rescue journey here: news.georgiaaquarium.org/RescuedSeaLion. 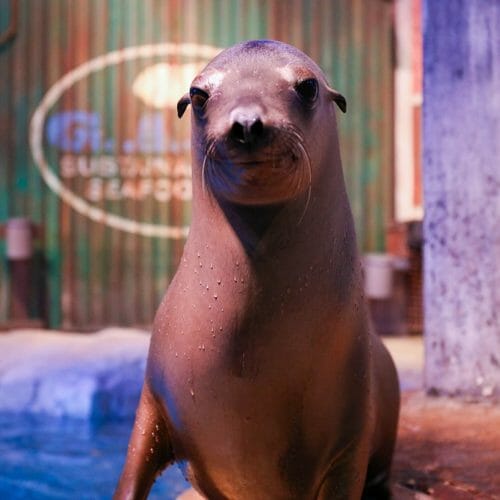