Atlanta Brewing, Georgia’s Original Craft Brewery, has partnered with the Georgia Aquarium since 2017 in an effort to support their research and conservation efforts around the world. In an effort to support their new shark exhibit and shark research initiatives, this release will be centered around the zebra shark. In Asia Zebra Sharks are considered functionally extinct, therefore Georgia Aquarium, along with other groups, has started the Star project made to reintroduce captive born zebra sharks into the wild.

Zwickelbier is an easy drinking German lager, part of the Kellerbier family. This refreshing lager is an homage to an old style that you don’t seem to see much of anymore. Zwickelbier is light enough for casual craft consumers but complex enough to keep consumers excited. Atlanta Brewing has prepared casks of the Zwickelbier to be served during their taproom release weekend beginning April 30.

“I’m really excited to serve this beer from our casks. It will give the beer a natural carbonation, which adds a unique character to an old style.” says head brewer, Eric Collier. “Beer served from casks offers a fun and unique beer experience, that you don’t see too often these days.”

Zebra Shark Zwickelbier will be available throughout the Georgia Market in May. 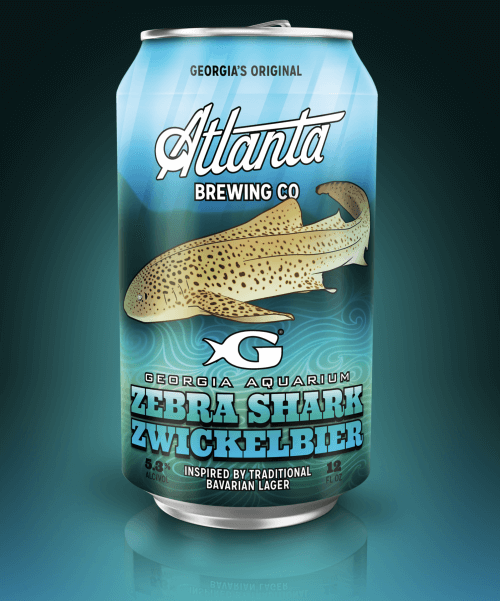 Newly hatched zebra sharks are dark with lighter, yellowish bars, resembling the stripes of a zebra. As the shark matures, these bars begin to break up into the adult coloration. Mature adults are light tan in color with a dark spotted pattern along the sides and back – leading to one of its other common names – the leopard shark.