Back to All Animals
All species of soft coral have eight tentacles which provide defense, capture food and clean debris. Nematocysts, or stinging cells, in the tentacles release an often-fatal toxin to prey or threats.

Corals are not adapted to the current, increased rate of ocean acidification and face long-term detrimental effects. 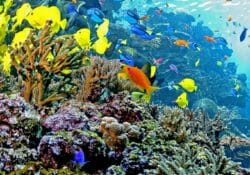