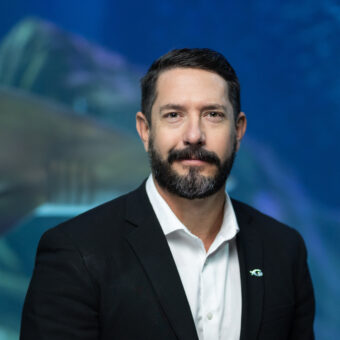 Andy started at Georgia Aquarium in 2015 as the Curator of Pinnipeds when sea lions returned to the Aquarium following a major expansion. After helping launch the sea lion presentation in the new Pier 225 gallery space, designing and launching the sea lion encounter program, he became the Director of Pinnipeds in 2021. Andy is responsible for the care and training of Georgia Aquarium’s collection of sea lions and harbor seals and continues to lead a diverse team in inspiring awareness and preservation of our ocean and aquatic animals worldwide.

Andy started his career in 1999 as a volunteer at Puerto Vallarta, Mexico’s Dolphin Adventure. During his time as a volunteer, he quickly realized his passion for the animals, training, and the natural world. Ten years later, Andy was managing Dolphin Adventure’s collection of dolphins and sea lions. During that time, he was able to develop numerous interactive programs, open ocean sea lion scuba dive experiences, facility development, implement and design animal breeding programs, and animal acquisitions. After leaving Dolphin Adventure, Andy helped coordinate and transport animals around Mexico to develop programs from Cozumel, Mexico in the Atlantic Ocean, to Sonora, Mexico and the Sea of Cortez. His time in Mexico taught him about the joy in diversity and love of cultures and he learned Spanish as a second language.

In 2009 Andy joined the Animal Care and Training team at Six Flags Discovery Kingdom in Vallejo, California where he led the team that cared for a variety of marine species. He led and participated in breeding research with walruses, killer whales, and dolphins. Andy is an author on Cognitive Enrichment for Bottlenose Dolphins (Tursiops truncatus): Evaluation of a novel underwater maze device. Clark, F. E., Davies, S. L., Madigan, A. W., Warner, A. J., & Kuczaj, S. A. (2013). Zoo biology, 32(6), 608-619.

Over the course of his career Andy has participated in field research, animal acquisitions, animal collections, and animal rescues.

Andy is a professional associate of the Association of Zoos and Aquariums (AZA) and has been a professional member of the International Marine Animals Trainers Association (IMATA) for the past 22 years. He is an active inspector for the Alliance of Marine Mammal Parks and Aquariums (AMMPA) and IMATA organizations. He is currently working towards his degree in Organizational Psychology through SNHU.