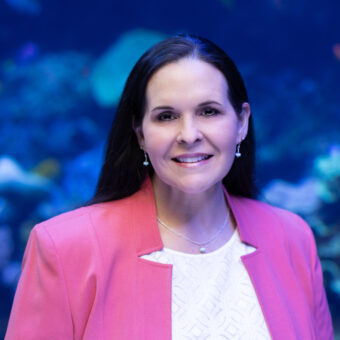 As the Vice President of Animal and Environmental Health at Georgia Aquarium, Dr. Tonya Clauss oversees both the veterinary medical team and the water quality and environmental monitoring team. In addition to her leadership role, she is actively involved with clinical cases and day to day operations while continuing to publish on interesting cases and clinical research in peer reviewed publications and book chapters.  She has directed or been involved with numerous scientific studies with animals including sea turtles, elasmobranchs, manatees, belugas, dolphins and penguins.

Clauss received dual bachelor’s degrees in Animal Science and Wildlife Ecology & Conservation from the University of Florida in 1996 and 1997 with a minor in chemistry. In 2003, she received her doctorate in veterinary medicine from the University of Florida, College of Veterinary Medicine. In 2004, she finished a master’s degree in Environmental Engineering Sciences with a focus on Wetlands Ecology.

Clauss’ veterinary medicine career began in 1994 with a veterinary assistant position for the Williston Veterinary Clinic in Florida. She also worked as a veterinary and research assistant at the Department of Large Animal Clinical Sciences at the University of Florida, College of Veterinary Medicine from 1995-2002. After graduation from veterinary school in 2003, Clauss accepted a position as staff veterinarian at the Mote Marine Laboratory and Aquarium in Sarasota, Florida. In early 2004, she was hired as director of veterinary services for Pelican Man’s Bird Sanctuary, a wildlife rehabilitation facility also in Sarasota. While at this position, Clauss became a research affiliate at The Florida Aquarium in Tampa, a position she held until December 2007. In February 2005, Clauss began working at Georgia Aquarium as an associate veterinarian and assistant manager of veterinary services, initially overseeing veterinary, water quality and commissary operations. She was promoted to Chief Veterinarian and Manager of Clinical Services in 2007. In January 2012, she was promoted to Director, Animal Health – and in 2017 became a Senior Director.

During her long standing career at Georgia Aquarium, Clauss supported the development of two highly successful veterinary residency programs through a joint venture with the University of Georgia College of Veterinary Medicine in Aquatic Pathology and Zoological and Aquatic Animal Medicine. She also established the Animal Health Veterinary Student Preceptorship program over 10 years ago, which provides hands on educational opportunities for 8 to 10 veterinary students each year from both North American and international veterinary schools. In 2013, with her support and direction, Georgia Aquarium joined forces with the Cornell University College of Veterinary Medicine AQUAVET® program.

In addition to teaching at the Aquarium, Clauss lectures on a variety of aquatic animal health topics at institutions such as University of Georgia, University of Florida, University of Tennessee, University of Wisconsin, Shark Reef Aquarium at Mandalay Bay and St. Matthews University in Grand Cayman. Based on her accomplishments in veterinary medicine, she received the Learner Family Wildlife Conservation Award for excellence in wildlife and zoological medicine in 2003, and she was awarded an Outstanding Young Alumnus award from the University of Florida in 2009.