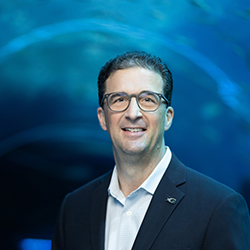 Eric started his career in 1984 as a sea lion and dolphin trainer at the Aquarium of Niagara Falls while also earning degrees in Zoology and Wildlife Management at the State University of New York’s Empire State College. While at the Aquarium of Niagara Falls, he developed his skills in animal training, husbandry, and public presentations. He assumed the role of Curator of Marine Mammals in 1990 and spent five years overseeing the aquarium’s animal training and behavioral enrichment programs.

In 1995, Gaglione joined the Mystic Aquarium as Curator of Marine Mammals & Birds. While at Mystic he gained valuable experience with beluga whales and a variety of marine mammals and birds including bottlenose dolphins, California sea lions, Steller sea lions, Northern fur seals, harbor seals, grey seals, Pacific walrus and African penguins. He was also responsible for the on-site animal care of Mystic’s stranded marine mammal program and cared for a variety of seal and cetacean species including but not limited to pilot whales, Risso’s dolphins, common dolphins, harbor porpoise, hooded seals, harp seas and harbor seals.

In 2005, Gaglione joined the Georgia Aquarium and initially managed of the Cold Water Quest Gallery where he assisted the start-up of the one the largest aquariums in the world. While in Georgia, he has continued to specialize in beluga whale management, training and care and further diversified his experience with marine animals including whale sharks. He has served in numerous capacities in the zoological division and is currently the Vice President of Zoological Operations. He is responsible for the management, training and care of the mammal and bird collections in the aquarium exhibit galleries which currently include beluga whales, bottlenose dolphins, California sea lions, harbor seals, southern sea otters, Asian otters and African penguins.

Gaglione has an extensive history working with and caring for beluga whales for the past 21 years. He has also participated in field research projects and health assessments involving beluga whales in the Hudson Bay Nelson River estuary, St. Lawrence River, Canada, and Bristol Bay, Alaska.

Gaglione is involved with several groups and associations related to the care of marine animals. He has been and continues to be a representative for the Georgia Aquarium with the Alliance of Marine Mammal Parks and Aquariums (AMMPA). He is a Professional Associate of the Association of Zoos and Aquariums (AZA) and is member of AZA’s Marine Mammal Taxon Advisory Group Steering Committee. He has been a member of the International Marine Animal Trainers’ Association (IMATA) since 1985 and served on the board for six years including Vice President (2010) and President (2013).