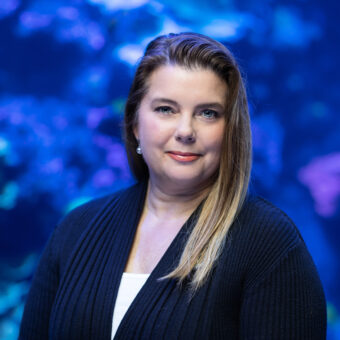 As the Director, Fish and Invertebrates, Kim Stone oversees Georgia Aquarium’s team that designs, builds, and maintains all fish and invertebrate habitats in the Western Hemisphere’s largest aquarium – over seventy-five exhibits. She develops and implements behavioral care plans for a variety of species including positive reinforcement training plans for species like sharks, rays, cuttlefish, and octopus. She also helps coordinate all field work.

Kim developed a variety of research and conservation projects and was instrumental in spearheading the coral research and propagation program; creating long-lasting partnerships with the Coral Restoration Foundation in Key Largo, Florida. She works collaboratively with other institutions to better understand large-scale reef systems. In 2004, she assisted with the Aquarium’s construction and development of, at the time, the largest closed system reef environment.

Kim has been sharing her passion for animals with aquarium guests since 1994. Prior to joining Georgia Aquarium, she assisted with the first weedy seadragon birth recorded in human care at the Aquarium of the Pacific in Long Beach, California, and worked with other marine biologists to satellite tag and release green sea turtles.

Kim has received many certifications throughout her career including her open water diver, rescue diver, and scientific diver certifications.