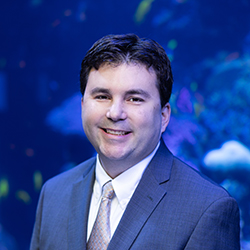 Michael joined Georgia Aquarium in 2014, bringing over 20 years’ experience in the fields of exhibit design, fabrication, and project management. He brings a rare combination of exceptional construction management skills along with a keen eye for creativity. As the Vice President of Exhibits and Projects, Michael is responsible for all capital projects, new exhibits, and existing gallery enhancements. In addition to his leadership role, he also oversees the Project management, Production, Exhibits, and the AV Integration teams. While here at Georgia Aquarium, some of Michael’s key projects include:

Michael graduated from Presbyterian College with a Bachelor of Arts degree in Theatrical Set Design. After graduation, he went on to work as the technical director for a collegiate theater and a local television station. From there, he transitioned to the project management and exhibit design world. Michael’s theatrical background translates well into working on both the design and construction sides of exhibit production and has given Michael invaluable insight into providing visitors a captivating and memorable experience. He has significant knowledge using sustainable methods and materials, with many of his projects attaining LEED recognition.

Michael has completed over 200 design/build projects over the course of his career in the exhibit industry. Some of his most significant are:

Notably, Michael was selected as one of the eight finalists from 5000 entries in the World Trade Center Memorial Competition, which is regarded as the largest and most prestigious open design competitions in history. His design Votives in Suspension captured the essence of every life lost that fateful day.

Michael and his wife Lisa have two children, Ethan and Emily. They reside in Peachtree Corners and are active participants in their community.