Back to All Stories
A New, first-of-its-kind research finds dolphins in human care are healthier than those in the ocean

A boat motor roars. A plastic water bottle idly floats by. Murky water laps up on the shore dotted with homes and people. A school of fish swim past; several dolphins are close behind, their dorsal fins glistening as they pierce the water’s surface.

This is an everyday scene in some of the southern waterways inhabited by bottlenose dolphins. More specifically, the Indian River Lagoon in Florida and in Charleston, S.C.

These two populations of dolphins have been studied as part of the Health and Environmental Risk Assessment (HERA) Project for over a decade. Late Dr. Gregory Bossart was at the helm of this project and, alongside partner researchers, had safely assessed and released more than 360 dolphins.

Findings from these studies raised concerns about overall ocean health and the long-term health of bottlenose dolphins. The first study of its kind, published May 3 in the scientific journal PLOS ONE, analyzes the role environment plays in the overall health and immune response of dolphins in the wild versus those in human care.

They compared samples and data from these dolphins with two populations living in human care: Georgia Aquarium and the Space and Naval Warfare Systems in San Diego.

The results are concerning.

They found that the two populations in Florida and South Carolina had more chronically active – or weaker- immune systems than those in human care. The study suggests that environmental stressors – parasites, pathogens, pollutants, or contaminated fish-  are having an impact on the immune systems of the wild dolphins. This could explain why the health of wild dolphins in both Florida and South Carolina is considered not normal.

“This is likely a result of encountering and fighting off illness caused by pathogens, parasites, and anthropogenic pollutants in the ocean that do not exist in closely managed zoological habitats,” said Dr. Patricia Fair, lead author of the study and research professor at the Medical University of South Carolina.

The late Dr. Bossart, a co-author of the study, explained the effects of an overly active immune system, “In humans, this type of prolonged smoldering inflammation is associated with cancer, autoimmune disease, cardiovascular disease, and increased vulnerability to infectious disease.”

Dolphins in human care had less chronically active immune systems. This is in part because they are exposed to fewer pathogens because their water and food quality is significantly higher. They also have access to routine and preventative veterinary care.

Why is it so concerning to see this in dolphins? The late Dr. Bossart explained, “These wild dolphins are trying to tell us something and we are not listening. As a sentinel species, dolphins are an important way to gauge the overall health of our oceans. If wild dolphins aren’t’ doing well, it could also indicate future impacts to ocean health, and even our own health.”

Georgia Aquarium’s HERA Project will continue to assess the health of dolphin populations in the Indian River Lagoon and Charleston.

To learn more about how you can help dolphin populations and about Georgia Aquarium’s dolphin research, please visit georgiaaquarium.org/conservation-field-station/research/. 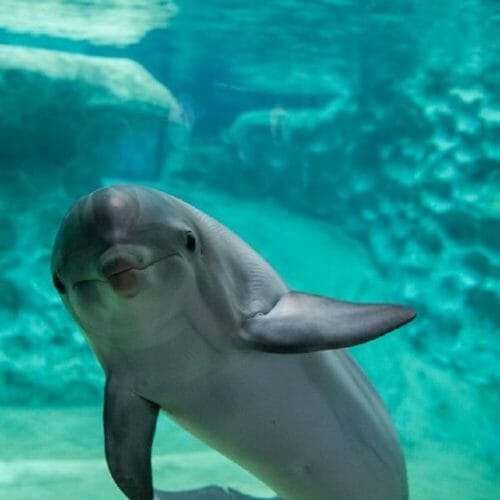