Happy Valentine’s Day! Today, we are celebrating love in and out of the water at Georgia Aquarium. Many species at Georgia Aquarium have different methods for reproduction, some species bond for life while others spawn to reproduce. These reproductive habits are unique to each species, and ultimately play a role in their overall welfare.

These bright orange beauties create monogamous pairs for life, living together in a small area around an anemone. While some animal species breed at a certain time of the year, clown anemonefish breed year round due to warm tropical waters. Before spawning and breeding, the male begins exhibiting behavioral changes, including fin erecting, chasing, and nest-making.

Staying close to the anemone, the female lays anywhere between 100 to 1,000 eggs, which are then externally fertilized by the male. After the eggs are laid, the male anemonefish takes close watch. It’s his responsibility to guard against predators, while continuously fanning the nest to oxygenate the eggs. After six to seven days, the eggs hatch and settle on the bottom where they begin to undergo juvenile development. During this juvenile development, the young begin to form a protective mucus coat that will keep them safe from the stinging tentacles of the anemone. You can see clown anemonefish in our Tropical Diver gallery.

Similar to clown anemonefish, African penguins also create pair-bonds for life. Before mating, the penguins make loud sounds and flap their flippers in unison. Breeding can happen all year, but peak times happen in November and March, resulting in two broods each year. African penguins lay two, sometimes three or four, whitish-colored eggs. These eggs go through an incubation period of 38 to 42 days.

Both parents take responsibility for their young. They sit on the nest and tend to their young, making sure to relieve each other daily. After hatching, chicks are fed by their parents for up to three months. At this point, they begin the fledging process, which is when they molt their down feathers and grow juvenile feathers. You can visit our penguins in our Cold Water Quest gallery.

The bat star has an unusually long breeding season. Both male and female bat stars discharge fertile sperm and eggs all year long. However, there is more of an abundance in the late winter and spring. Depending on the species of sea star, growth rates and life spans vary. Sea stars can live anywhere between five and 35 years.

Unlike the egg laying penguins or the spawning bat stars, sandbar sharks are viviparous, meaning females carry young in their uterus via a placental sac. Depending on geographical location, a single pregnancy can last between eight to 12 months, and a mother can give birth to anywhere from six to 13 pups. Mating takes place from May to June north of the equator, and from October to January south of the equator. 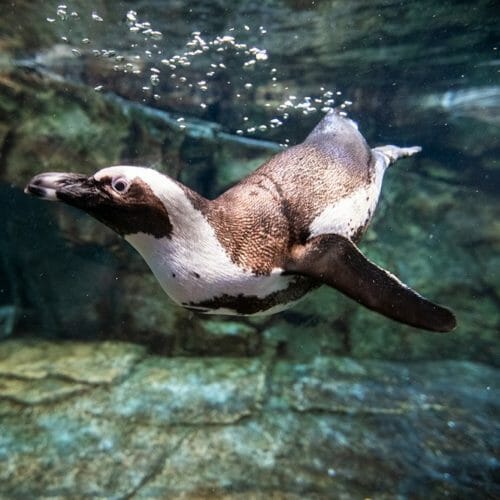