You may see some additional larger-than-life residents at Georgia Aquarium– totaling more than 3,800 pounds. Two new beluga whales are settling in with their new pod in the Cold Water Quest gallery alongside resident whales, Qinu, Nunavik, and Maple.

On Saturday, February 9th, male beluga whale Imaq (EE-mack) and female beluga whale Whisper were welcomed to Georgia Aquarium in Atlanta. Less than 30 beluga whales remain in North American accredited facilities; which makes it crucial for facilities to collaboratively sustain the population, provide opportunities for research, and continue connecting millions of people with these incredible animals.

Imaq is 31 years old and will now be the largest whale at Georgia Aquarium weighing in at nearly 2,000 pounds. He will serve as a great role model for 9-year-old male, Nunavik.  Whisper is 19 years old and is marble-gray in color and is known to be quite vocal, like the other females, Maple and Qinu. Imaq and Whisper will be introduced to the other whales over the course of their first week at the Aquarium and watched carefully as the new group determines their social structure. Beluga whales are very gregarious and while their social groups may change over their lifetimes, it’s very important in their daily life. The trainers caring for them each day will be incorporating them into training sessions, enrichment, and preventive healthcare sessions.

Beluga whales are typically found in arctic waters near Alaska, Canada, Norway, and the west coast of Greenland. While researchers estimate there are more than 150,000 beluga whales worldwide, some subpopulations are listed as ‘Endangered,’ like the Cook Inlet in Alaska. Georgia Aquarium’s experts partner with government agencies, conservation groups, and other aquariums to assist in critical research programs that will have a direct impact on wild beluga whale populations.

One such research project is an important metabolic study in conjunction with government and university partners that studies Georgia Aquarium’s resident beluga whales, Qinu, Nunavik, and Maple. This study will help determine how much energy beluga whales expend when they are swimming, resting, and diving. This data will be collected and then used to help make crucial decisions on activities that may negatively impact beluga whale health and their environments.

Beluga whales face many threats in the ocean, including increased noise from shipping and drilling, increased pollution in their environments, contaminated and diminished food supply, and rising ocean temperatures. The future of beluga whales is important not only for their future, but the future of arctic ecosystems.

By continuously monitoring the North American population, accredited zoos and aquariums can make decisions on what’s best for each beluga whale in their social grouping, breeding status, and their age. The goal of these institutions is to sustain the population and ignite an interest and connection for millions of people across the continent. Through these efforts beluga whales will hopefully continue to thrive in North America and across the globe. 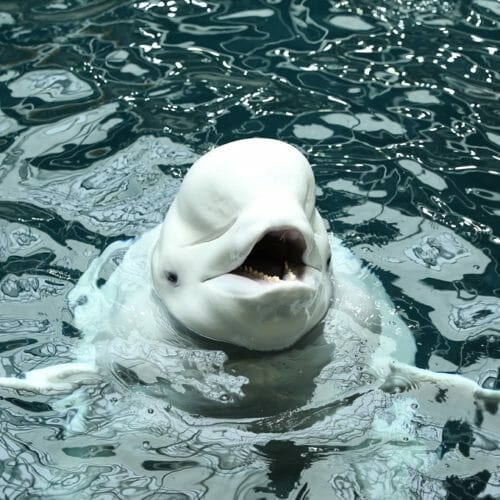