Back to All Animals
The horned puffin is named for the characteristic black projection over the eye. Puffins, like guillemots and murres, belong to a group of seabirds known as auks, or alcids. Puffins and other alcids are well adapted for life on the ocean. They have short, strong wings and legs set far back on the body, making them excellent swimmers and divers. However, these same traits make alcids clumsy on land, and make taking flight more challenging.

Puffin colonies have now become tourist attractions in parts of their range. 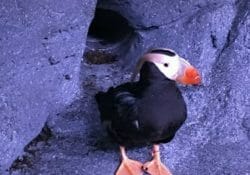