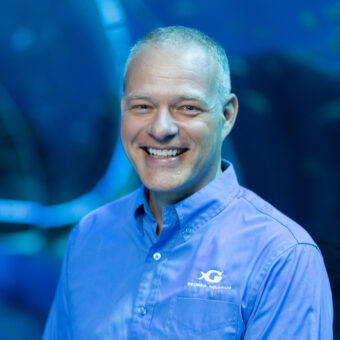 Dennis Christen is Georgia Aquarium’s senior director of zoological operations responsible for leading a diverse group of animal trainers in the management, care, training, and programming of the marine mammal and sea bird collection.

He brings more than 30 years of professional marine mammal management, husbandry, rehabilitation, and training experience to the Aquarium. Christen began his career in 1989 at the Vancouver Aquarium where he worked with veterinarians, animal care staff and volunteers in the care and training of marine mammals and helped coordinate the marine mammal rescue and rehabilitation program and worked as one of the first leads of the Aquarium’s partnership with the North Pacific Universities’ Marine Mammal Research Consortium’s Steller sea lion research program.

Christen moved to Alaska in 1998 to help open the Alaska Sea Life Center (ASLC) where he worked with harbor seals and Steller sea lions and helped manage the ASLC marine mammal rescue and rehabilitation program. He was an instrumental part of a novel research program studying juvenile endangered Steller sea lions that were held in temporary quarantine conditions. This groundbreaking work, and the animal training techniques he developed to support it has inspired other projects involving conservation of free ranging wildlife. Christen has been awarded three times by the International Marine Animal Trainers Association for marine animal training achievement and research/ husbandry advancement.

Christen joined Georgia Aquarium in 2006 and initially managed the care of species within the Aquarium’s Cold Water Quest Gallery including beluga whales, California sea lions, Southern sea otter and African penguins. He was promoted director of animal training and interactive programs, prior to assuming his current position.

At Georgia Aquarium, Christen has worked on several notable projects including his role on the design team for major exhibit renovations for the Cold Water Quest and Truist Pier 225 galleries, and concept and design of the Aquarium’s new puffin exhibit. Christen was also dispatched to Alaska to be part of a select team of animal care professionals to assist the Alaska SeaLife Center in rescue, stabilization, and rehabilitation of a neonate beluga whale.

Christen is a leader in all facets of marine mammal management, care, and welfare. In addition to marine mammals, Christen has curatorial, husbandry, and behavioral management experience with marine fishes, invertebrates, and sea birds. He is also experienced with facilitating professional accreditations for the International Marine Animal Trainers Association (IMATA), Association of Zoos and Aquariums (AZA) and the Alliance of Marine Mammal Parks and Aquariums (AMMPA). He is the former chair of IMATA’s Animal Training Advisory Committee and former chair of the AMMPA Accreditation Committee.

Christen graduated from the University of British Columbia, attaining a degree in biology with an animal biology specialization. Christen is the proud father of three teenage sons, Jace, Rylan and Jaxen.