Back to All Animals
Although the southern sea otter is not a social animal and often live alone, it does frequently occur in small groups where food sources are plentiful and will rest in a group called a “raft."

Southern sea otters can store food in "pockets" under their foreleg 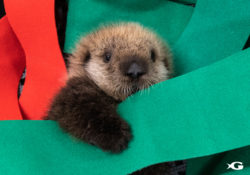