Back to All Animals
The pigeon guillemot is a small seabird native to the northern Pacific Ocean. Guillemots, like puffins and murres, belong to a group of seabirds known as auks, or alcids. Guillemots and other alcids are well adapted for life on the ocean. They have short, strong wings and legs set far back on the body, making them excellent swimmers and divers.

Unlike most auks, the pigeon guillemot will use its feet to propel itself while diving underwater, as well as its wings 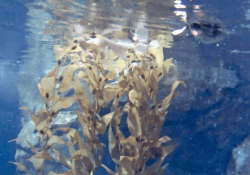