Upon arrival in San Jose, gather with fellow travelers and transfer to Puerto Caldera to embark Le Dumont-d’Urville.

Visit Curu National Park. Over ten thousand species of plants, three hundred species of birds and some two hundred species of butterflies are present in this transitional zone, where the less dense undergrowth makes spotting easier than in the deeper forest. Howler monkeys, white collared monkeys, coatimundis, peccaries, and toucans call this area their home.

Scenic Manuel Antonio National Park is an ideal combination of warm Pacific waters and rain forest that grows down to the beaches. The park protects many habitats, including mangroves, beach vegetation and marine resources. Due to its isolation, it is one of the best places in Costa Rica to see wildlife, particularly sloths, coatimundi, agoutis, White-faces Capuchin monkeys and the tiny Squirrel monkey.

Today is our second day on the Osa Peninsula. Excursions take us to the Orchid Garden to see its native and exotic plant collection and to Finca Köbö, a sustainable farm for cacao, where we learn about the steps of making good chocolate, as we follow the process from harvest of the bean through to its transformation into edible chocolate.

Our first call in Panama is at the seldom-visited island of Cebaco at the mouth of the Gulf of Montijo. Cebaco is famous for its sport fishing (particularly tuna) and surfing. Enjoy its white-sand beaches and opportunities for snorkeling and diving in the crystal-clear waters.

Declared a reserve in 1980, the Darien National Park was designated a UNESCO World Heritage site in 1981 and a Biosphere Reserve in 1983. We will go ashore at Playa Muerto, where we will encounter a large palapa set up on the beach. Members of the local community will meet with us, and there will be dance performances and handicrafts for sale. We will have time to explore the surrounding area, including a waterfall that is a short walk from the beach.

Le Dumont-d’Urville transits the Panama Canal, passing from the Pacific to the Atlantic.  The scenery and mechanics of the transit are fascinating, with the ship being raised and lowered a total of 85 feet.

The San Blas islands stretch from the Golfo de San Blas nearly all the way to the Colombian coast. Meet the local Kuna people, who govern the islands as an autonomous province with minimal interference from the government. The Kuna have maintained their own economic system, language and culture, with distinctive legends, music and dance, which they willingly share with visitors.

Our second day in the San Blas Archipelago will be focused on Holandes Cayes, nicknamed “the swimming pool.” The spot is popular with the cruise and yachting community for its white-sand beaches and snorkeling and diving opportunities.

Disembark and transfer to the airport for flights homeward. 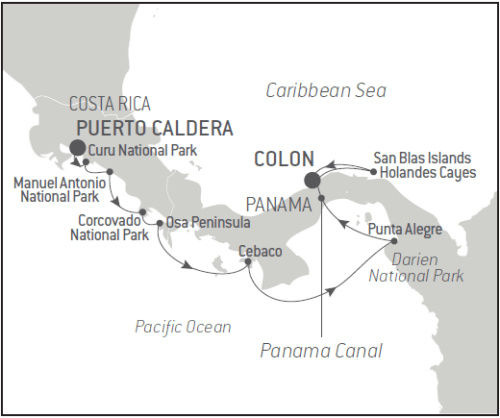