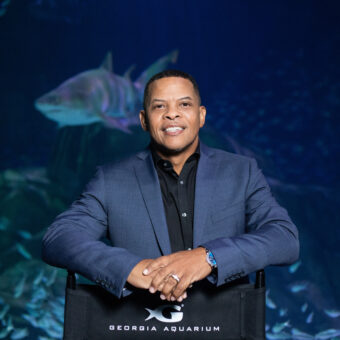 Dr. Brian Davis is Georgia Aquarium’s President and Chief Executive Officer. Davis brings with him more than 25 years of experience in senior leadership roles within zoological and educational institutions, having previously held positions at Georgia Aquarium on two separate occasions. Dr. Davis first joined the Georgia Aquarium team prior to its founding in 2003, as the Director of Education, later served as the Aquarium’s Vice President of Education and then most recently as Executive Vice President of Operations.  Dr. Davis served as the most recent past Chair for the Association of Zoos and Aquariums.  He was also previously appointed by Georgia Governor Brian Kemp to the Georgia Tourism Foundation Board of Directors.

Prior to Dr. Davis’s most recent role at Georgia Aquarium, he served as President and CEO of the Maritime Aquarium at Norwalk, where he oversaw the enhancement of the Aquarium’s footprint. Dr. Davis has also served in both teaching and administrative roles in Cobb County’s school system, and spent time developing education programs at both New York Aquarium and Zoo Atlanta.

Dr. Davis has authored and co-authored papers related to science education, aquariums and other science related topics. He has served as an Adjunct Professor for Schools of Education at Georgia State University and Mercer University, and has served on the Boards of Directors for Centennial Place Elementary School, Norwalk Chamber of Commerce, Open Door Shelter, NorwalkACTS, and has served on the Board of Directors for the Association of Zoos and Aquariums (AZA). He is a member of Alpha Phi Alpha Fraternity and the Association of Zoos and Aquariums.

A New Jersey native, Dr. Davis has fond memories of enjoying family vacations at the shore, where his lifelong passion for the ocean was ignited. Dr. Davis graduated from Rutgers University in 1992 with a Bachelor of Science degree in Environmental Science, later earning both a Masters of Education and his Ph.D. in Secondary Science Education at Georgia State University. Dr. Davis and his wife, Dr. Andrea Davis, have three children and two grandchildren.