Uniquely-designed Travel Program to the Seychelles

Thursday, April 4
EUROPA ISLAND
Located in the south of the Mozambique Channel, Europa is the largest and best preserved of the Scattered Islands. This atoll is covered by dense forest and mangrove. Surrounded by coral reef, home to impressive marine life, and host to a plethora of bird colonies, Europa is also the most important laying ground for green sea turtles.

Saturday, April 6
JUAN DE NOVA ISLAND
Located deep inside the Mozambique Channel, this unusual islet owes its existence to its coral reef, which has developed over tine an almost submerged land made of coral and sand. Home to the biggest colony of Sooty Tern in the Indian Ocean, this tiny strip of land is a protected nature reserve.

Monday, April 8
GLORIEUSES ISLANDS
The Glorieuses Islands form an archipelago of unrivalled beauty. Their geographic isolation and their very limited human settlement make them a true geological sanctuary. Regularly used as the “zero point” in scientific studies, they offer their rare visitors almost pristine vegetation composed mainly of mangrove and coral reefs that are home to the world’s highest concentration of sea turtles.

Tuesday, April 9
NOSY KOMBA, MADAGASCAR
Nosy Komba, known as “lemur island”, is shaped like a gigantic turtle shell and covered in dense tropical rainforest. This vegetation is home to black lemurs. The many small beaches and the emerald-colored water make Nosy Komba a natural gem that only a select few have the privilege of visiting.

Wednesday, April 10
ASSUMPTION ISLAND, SEYCHELLES
The first island in the Seychelles Archipelago that we encounter is Assumption. This tiny island was nearly destroyed in the early 20th century when its vegetation was cleared to allow for guano mining. But life on its coral reefs remains abundant. Much of Jacques Cousteau’s Silent World was filmed here.

Thursday, April 11 & Friday, April 12
ALDABRA, SEYCHELLES
Located in the very heart of the Seychelles Archipelago, the Aldabra Atoll is one of the last virtually untouched sanctuaries on Earth, where a large population of sea turtles has found refuge. Listed as a UNESCO World Heritage site, it is formed by four small reef islands separated by narrow passes and a lagoon lined with mangrove and fine-sand beaches. We spend two days in this remarkable environment, snorkeling and diving, or simply enjoying the beauty of the largest atoll in the world.

Sunday, April 14
ALPHONESE ATOLL
This former coconut plantation is part of the Almirante Group of the Seychelles. In many ways it is the quintessential tropical island of white sand and crystal water against a backdrop of leafy palm trees.

Monday, April 15
LA DIGUE/VICTORIA, MAHE
On our final day, we reach the capital of the Seychelles in Mahe. But before docking there, we call at La Digue. Time stands still here on this small stretch of land, where the only transport is by bicycle or oxcart. 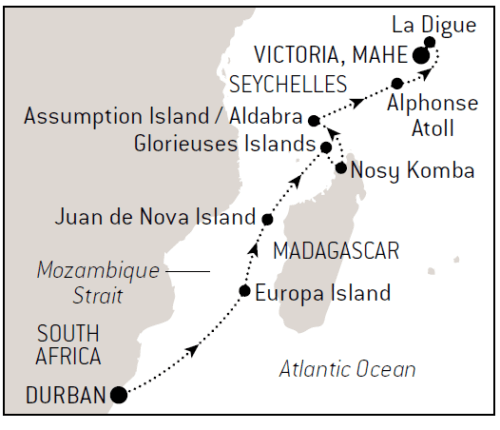